What are the default controls?

There aren’t any default controls. When DIDIBoats first starts it will force you through the controller setup screen before you can play with the boats. If you have already been through this screen, press ESC to go to the design screen (the blue screen with the boat and design panel), then press ESC again. A menu will pop up. Click “controls” to go back to the controller setup screen and view or change your controls.

How do I set up the controls for steering, throttle, etc?

In the controller setup screen there are four main buttons shown below (click to enlarge): 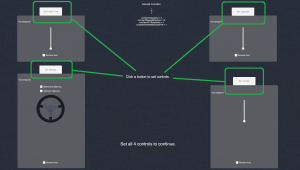 Click “Set Steering” to set the control/keys/buttons you want to use for steering. Then click “Set Throttle” to set the throttle controls, then “Set Engine Trim,” then “Set Jackplate.”  (The order doesn’t matter, just set up all four somehow).

Note for steering wheel users:   If you have an H-Shifter attached, make sure it is in neutral if you’re trying to assign jackplate or trim  (or anything else) to a button.  If the shifter is in gear, it’s pressing a button so it will think that’s the button you want to use.

The instructions in the middle should guide you through each process. If you’re using a pedal for the throttle, you’ll want to check the “reverse axis” box in the throttle section. Play with the controls and you’ll see the sliders move. Up is positive (increasing throttle, jackplate up, engine trim up) and down is negative.  The steering wheel on the screen will rotate the same way it will when you’re driving, so you can use that to get the steering working the way you want it.

After all four controls have been set up you’ll see a big green “DONE!” button near the bottom. Click that to finish and return to the design screen.  Your controller setup is now saved and will be remembered the next time you run the program.

There are two main types of settings you can assign to each control that are presented to you with a checkbox at each step:

“Buttons/keys” will let you assign buttons on a controller or keys on the keyboard to the control. Usually for engine trim and jackplate you’ll probably want to have buttons or keys. On a real boat these are controlled by buttons or levers that act as buttons.

For steering or throttle, a controller axis (joystick, pedal, steering wheel, analog stick on a game pad, etc..) will work best, but you can use keys or buttons for one or both of those too if you want. It’s fully configurable across multiple controllers. You could have buttons on a gamepad control the jackplate, keys on a keyboard control the engine trim, a joystick control the steering, and a foot pedal control the throttle. Why on Earth you’d ever want to do that is beyond me, but you could do it if you wanted to.

Under the steering wheel section are two options. These pertain only to the force feedback method used and in no other way affect the performance or handling of the boat.

1) Mechanical steering
When this box is checked, the force feedback is computed using forces and torques coming from the engine, the engine case, the propeller, and so forth. It’s computed from hundreds of forces and torques in the system, so you’ll notice effects like the throttle pulling the wheel to the right, engine trim having an effect on pull, and so forth. Even gravity is included, so if you crash on the shore with the boat resting on its side, the engine will fall under its weight and pull the steering wheel along with it.

2) Hydraulic steering
Mechanical steering might feel strange to people coming from a car sim background where the steering wheel effects are totally different, so the hydraulic steering option is included as well. This basically just acts as a simple damper that resists rotation.  It ignores all the complicated effects computed using the previous method.